Peter Bensinger Picked as "The Most Wired Lawyer in America" 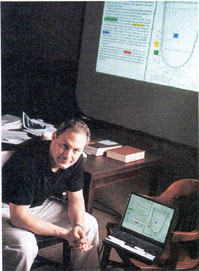 Have bags, will travel.

Whether he comes in war or in peace or in search of business, Peter Bensinger, Jr., comes prepared. For Bensinger, preparation is not just a state of mind--knowing that you've done your homework before a deposition. It's not just a matter of gear--having a pleasing PowerPoint show to convince a prospective client or flashing a few video clips on a screen at trial.

For Bensinger, a 42-year-old partner at Chicago's Bartlit Beck Herman Palancher & Scott LLP, preparation is a way of looking at the world and the practice of law. Call it the AAA way, or the Peter Principle. He's ready to practice law anytime, anywhere, anyhow. Computers, software, cell phones, and all the related accessories let Bensinger stay connected and keep working wherever he may be. (Okay, so maybe the spare shoehorn and emergency smoke hood aren't essential, but he has used the Leatherman Super Tool to cut open a ketchup bottle that is the subject of a patent suit.)

Bensinger may be the most wired lawyer in America and one of the clearest examples of how technology can explode the myth and tradition that law is a deskbound endeavor.
At a firm where fluency with computers and databases is a requirement, Bensinger is "in the advance guard," says Philip Beck, a name partner at the firm. Bensinger is often the firm's beta tester for new tools and technologies, and he's always looking for a new way to use technology.

Bensinger's most recent innovation is what he likes to call a magazine brief. In a recent patent case, Bensinger incorporated full color photos, PowerPoint slides, and other visual elements into a brief. Bensinger used the brief to present his interpretation of the scope of the patent. Bensinger isn't a good trial lawyer because he uses computer tools. He's good because he's passionate about the profession and the plight of his clients.

To borrow (and slightly misuse) a concept from AA, technology is Bensinger's enabler. It helps him work smarter and present himself more clearly. Technology lets Bensinger "make things simple" for the judge and jury, says a courtroom adversary. But computers are also his cross to bear. If Bensinger is the most wired lawyer in America, he may also be the heaviest traveler.

On a recent visit to New York, Bensinger came with 61 pounds of gear, stuffed into two Briggs & Riley stackable bags. His suit bag, which also carries his printer, speakers, and digital camera, tipped the scales at 28 pounds; an LCD projector and case, 46 pounds.

Do the math: 135 pounds of stuff. That's more than many lawyers weigh. With the exception of the projector--an occasional companion--Bensinger brings this gear with him wherever he goes: client offices, courts, hotels, and restaurants. And Bensinger is often on the go. Bartlit Beck is based in Chicago, but its clients usually are not. Bensinger estimates that he will log 80,000 air miles this year. By road warrior standards, that's not an insane number, but it's still a lot of time afloat in the jetstream and down the hall from the ice machine.

"This is my office," he says of his gear. "There is no distinction between being on the road and being at the office."
"You need to be in good shape to practice law this way," Beck quips.

The luggage may someday give Bensinger a hernia. But until then it gives him flexibility.

At night in his hotel room, Bensinger can prepare a brief with all relevant discovery documents at his disposal, because of the super-capacity drives he carries. He can also create a client presentation--and it won't look like a lawyer prepared it.

The next day he can visit a client who is worried about being sued for patent infringement. He can pull that patent off the Internet at the client's office, splash it on a screen, and visually highlight or zoom in on the key passages and diagrams--all in a matter of moments. If the client hands him an important document, he might scan it on his portable unit. He could then display it too, splitting the screen and showing the document and patent side by side.

The zooms, split-screens, and visual highlights all create "a kind of magical effect," Bensinger says. "Everyone is on the same page."
If you call Bensinger in the office, and he's not there, the call is forwarded to his cell phone. When he dines with clients, he brings his gear so that, if the mood strikes or the need arises, he can retrieve key documents, start a case outline, or brainstorm.

In depositions, Bensinger is unlikely to rifle through stacks of papers in search of documents. he simply passes a wireless wand over the barcode of the desired document and up it pops on screen.

In court, Bensinger knows that even if every piece of equipment fails, there is a backup plan. There are spare LCD projector bulbs close by. There is a spare screen in case the main one rips. (it happens.) There are multiple computers with precisely the same set of documents and directory structure. It doesn't do much good to have a backup document if you can't find it during cross because it is hiding in an obscure cranny of the hard drive.

And if a written document is incriminating, it is probably doubly so if shown on screen. Bensinger will project the smoking gun memo on screen with software called TrialMax. The software can display, zoom in on, and bracket the potentially damning passage. Using a software tool called VideoNote, Bensinger routinely show jurors video clips of depositions with the running transcript below.

TrialMax and VideoNote are shrink-wrapped commercial products. You don't need to practice at Bartlit Beck to use them. But until recently, few lawyers recognized the power of presentation and persuasion that they offer.

"We believe that if you establish yourself as the person who is in charge of the courtroom, it will establish credibility with the jurors and even the judge," Beck says.

Blame it on Fred Bartlit, the firm's 68-year-old spiritual leader, a former Army Ranger and Kirkland & Ellis partner. Bartlit taught himself to type when most of his peers were winding down their careers. He founded his 35-lawyer firm in 1993 partly on the belief that technology could give it an edge over foes ten and twenty times its size. He also wanted to change flat and alternative fees, a practice that encourages efficient lawyering.

Bartlit has drilled into his colleagues' heads the Army Ranger concepts of preparation, repetition, contingency, and direction.

Bensinger was an eager student, but not because he was in ROTC. He learned many of the same concepts in the theatre, where the show must go on even if the spotlights won't.

Between college and law school (Stanford University and New York University), Bensinger spent several years acting and directing in New York. His shining moments as an actor were cameos on Saturday Night Live and on All My Children.

More recently, he played President Clinton in a local bar skit. On stage and in war, you must have a plan for when the bottom falls out. Bensinger carries this belief to an extreme, sometimes for amusement. He occasionally pulls out the emergency smoke hood (you slip it over your head to avoid carbon monoxide poisoning) on an airplane just to see the reaction of nearby passengers. And he had come to expect ribbing from even his partners at Bartlit Beck.

"Some of this is just Peter's oddball personality," Beck says affectionately.

Bensinger takes it in stride. His wife, he says, "loves me for who I am, but recognizes that some people may think it's eccentric."

Bensinger prefers to see it as effective.