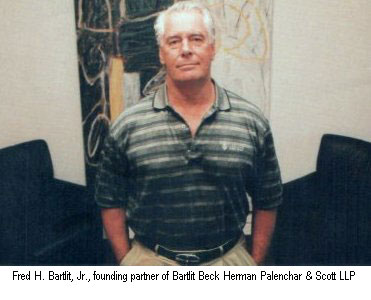 Fred Bartlit Jr.'s imposing figure, made almost larger than life by a hawk-like intuition and steel-trap wit, has for three decades cut a formidable profile in American courtrooms and carved a legendary reputation for the corporate defense attorney.

At age 66, Bartlit shows no sign of slowing down. Four o'clock wake-up calls aren't unusual for the former U. S. Army Ranger, and he has racked up 44 weeks of trial time during the past three years, defending such high-profile clients as Bissell Inc., DuPont, United Technologies and Pratt & Whitney in high-stakes patent infringement and antitrust lawsuits.

But as a founding partner of Bartlit Beck Herman Palenchar & Scott LLP, a 6-year-old corporate defense boutique dubbed one of the hottest in the nation, Bartlit is doing more than amassing big wins in court. Since 1993, he and 18 former Kirkland & Ellis attorneys in Denver and Chicago have been practicing high-tech, button-down, lean-and-mean trial law.

Bartlit Beck's mantra of "less is more" is the cornerstone of the firm's trendy new digs in lower downtown's 1899 Wynkoop building—complete with rock climbing wall and permanent "war room"—and Bartlit's upcoming move from his native Chicago to the Mile High City.

"We founded this firm believing that the practice of law needs to change," said Don Scott, Bartlit Beck founding partner and Denver litigator. "What we found was that although good work was being done, people weren't being rewarded for winning cases."

Bartlit Beck's winning track record, popularity with young associates and Bartlit's decision to take up permanent residence in Colorado also could be rewarding for Denver's legal community, according to resident lawyers.

Bartlit Beck attorneys try cases from California to Florida and are on the legal A-list of some of the world's largest corporations. Struggling to prove they can compete with big national firms, Denver litigators could benefit from Bartlit Beck's continued growth in the city and notoriety as a small but stellar corporate defender.

"Denver—they've never had anybody like Fred," said Frances Kencilja, a litigator at Denver's Kencilja & Associates.

"His law firm has one of the most sophisticated complex litigation practices in the country," said Brownstein Hyatt Farber & Strickland partner Norman Brownstein. "Absolutely, they are going to be a formidable competitor.''

Clad in a plaid flannel shirt, a bit frayed at the elbows, Bartlit recently sat at the table of one of the few Denver restaurants he claims can rival Chicago cuisine, and shared his vision of legal corporate culture. In his deep television-anchor voice, Bartlit picked apart the economics of traditional corporate litigation. He scrolled through a PowerPoint presentation on a laptop he whisked from under his chair and propped on the table.

"There's no big mystery to it. It's common sense," he said.

At big firms like Kirkland & Ellis, legions of eager young associates are hired to work long and—Bartlit emphasized—billable hours. For every associate a law firm puts on a case, it can bring in as much as $200,000 a year in firm profits.

"If you are making 200 grand on everybody you put on a case, you're going to put more bodies on a case," said Bartlit. "All the money is made by associates because all associates are margins. Nobody knows what a lawsuit should cost or a deposition should cost."

A new way of doing things

Bartlit Beck has pioneered a new system in which the attorneys bill according to the outcome of the case, not by the hour, and one or two experienced litigators take a case to trial instead of the typical 20 or 30.

The firm hires only a few associates each year and trains them for the long haul, so that experienced attorneys outnumber newcomers.

"Early in my career we tried cases for GM with three lawyers and won," said Bartlit. "There's just this pervasive view in the legal community that if you can throw more bodies on it, you must be better, and we are the antithesis of that."

The key to Bartlit Beck's small trial teams is technology. All of the attorneys are computer literate—the Denver office has as many computer technicians as partners—and e-mail is the preferred mode of correspondence with clients and in-house corporate counsel. The office has no Dictaphone machines or secretaries frantically typing phone correspondence onto reams of paper.

In the information age, this may seem standard fare, but for a profession notoriously stuck in the mud of tradition, Bartlit Beck is ahead of the times.

Polly Swartzfager, Bartlit Beck partner and corporate transactions attorney, said at big Wall Street firms it's not unusual for most of the top partners to be e-mail illiterate.

When she arrived in Denver, she was surprised at Bartlit Beck's technological savvy.

"At the New York law firms, you are used to having a secretary and they gave me a laptop and said, 'Learn how to use it,'" she said.

Recently back from maternity leave, Swartzfager said her high volume of computer correspondence from home had clients and colleagues fooled. Many didn't realize she had been out of the office on leave.

The technology bent and nontraditional culture of the firm is attractive to both young lawyers fresh out of school and young executives at growing software companies shopping for a law firm.

"We're not suits; we're perfect for these guys," said Bartlit. "We're not renegades, but we're certainly not suits."