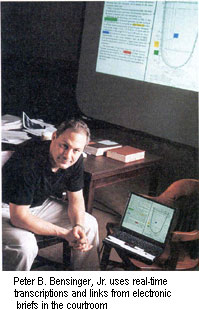 The man on the video screen looked alone and uncomfortable, staring down at the table as a question was asked. Before answering, he placed his hand over his face, shielding his eyes, and held it there. Ten seconds passed; 15 seconds. Finally, his answer: "Er, um, no, uh, that's not what it means." He didn't look convinced.

Chicago lawyer Peter B. Bensinger, Jr. jumped in. "Look at his body language," he told attendees at a seminar at the 1999 ABA Tech Show. "It's, 'Oh my God, how am I going to explain this?' And the pauses. He took his hand and covered his face with it."

The man was a deponent in a case Bensinger was litigating, and to call up the snippet of videotaped deposition, Bensinger of Chicago's Bartlit Beck Herman Palenchar & Scott, merely clicked on a link within a computerized case brief. Instantly a window opened and the video clip appeared.

Bensinger later hinted at the delicious prospect of impeaching the deponent with such video testimony were he to be called as a trial witness.

When it comes to using technology in the courtroom, the image is part of the message. And lawyers who aspire to high-tech presentations have to learn that McLuhanesque lesson if they are to make their presentations effectively.

Over the last few years, videotaped depositions, real-time transcription and demonstrative slide presentations have gone past the cutting edge, with some courtrooms transformed into veritable studios.

But integrating the gadgetry smoothly is the next learning curve, and the uphill part may be unlearning traditional one-dimensional trial presentations. For instance said trial consultant Sonya Hamlin, merely transferring words to slides won't do. "You have to dump the whole idea of using words," Hamlin said. "Use concepts."

As an example, to explain one part per trillion in a recent toxic torts case, Hamlin showed a series of slides, starting with a photo of a 50,000-seat stadium with a single seat highlighted. As the slides progressed, the photo split like an amoeba until the point was made: one seat in 20 million stadiums.

Another advance fast becoming the darling of trial lawyers is real-time transcription, which allows testimony to be projected on a lawyer's laptop—or on a video screen—as it is transcribed. Bensinger praised the technology as a tool to keep track of testimony.

For example, he said, a complex case may require a witness to be directed back to an earlier point, one that may have taken hours to explain.

Rather than asking the court reporter to read the section aloud—and praying it's the correct passage—the lawyer can locate it quickly on a laptop by entering key words.

But real-time transcription requires preparation, Bensinger said, such as advising the court reporter of unusual spellings. The game is lost, he noted from experience, when the lawyer pounces on earlier testimony, only to find phonetic spellings with unintentionally hilarious connotations.

The most profound change in traditional thinking involves recognizing how high-tech presentations enhance the experience for the jury. "Visual materials are more emotional than words," said Hamlin.

She advised lawyers to eschew multiple monitors and use one large screen instead. "Pay attention to what the jury has to watch," she said, suggesting that lawyers try out the equipment in the courtroom to counter glare from lights. Bensinger suggested using a projector that illuminates the screen from behind to eliminate clumsy choreographing.

Bensinger may have an edge. A former actor—he had a cameo in a Saturday Night Live sketch in the early 1980s—Bensinger said he finds his stage training an asset. For example, it is more effective to stand beside a screen rather than in front of it, an "upstage-downstage" technique.

In addition, Bensinger has an appreciation for lighting. In one videotaped deposition, he noticed his client sitting under a bare light bulb. "She looked sinister," he said. The solution: moving the table back a foot so the light fell on her face.

The goal, said Hamlin, is not to let the medium become the sole message. "The most difficult aspect of using computers in the courtroom is losing the jury," which can be so overwhelmed by the gadgetry that it misses the point of the case. "Use [technology] as an adjunct to your talking."

Bensinger agreed. "This is uncharted water: how to use technology to better present your case. It can't be just technology for technology's sake."