The Next Generation Of Killer Litigators 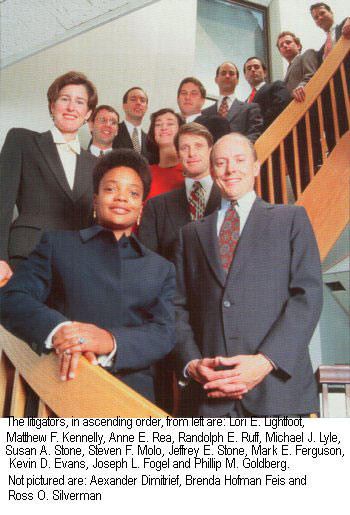 In September, Illinois Legal Times set out to find the up-and-coming litigators in the city of Chicago. The only objective criteria we set at the outset was that they had to be under the age of 40 and they had to have actual trial experience. With those standards, we wondered whether we would find a large enough pool of young litigators from which to choose from. After all, very few litigators these days have tried cases before they have reached the age of 40.

We began our research by talking to the managing partners and the heads of litigation of Chicago firms with significant litigation practices. We asked them to nominate young litigators who they thought would excel in the practice area 10 or so years from now. If they nominated someone from their own firm, they had to also nominate a lawyer from another firm. Fifty litigators were nominated.

In going forward from there, our standards turned subjective. We interviewed the nominees at length. Specifically, we asked about their experience and the cases they have tried. It turns out that our initial concerns were unwarranted. Our nominees had each tried several cases, some of which are high-profile.

The final selection process was difficult. We had to eliminate some outstanding lawyers. However, our final list is comprised of those litigators who we think stood out the most as possessing strong legal skills, a focus on their clients' needs, tenacity and an overall passion for their work. If we could use only one word to describe them all, it would be unstoppable.

What follows is our best attempt to profile each litigator in the small space allotted to do so. 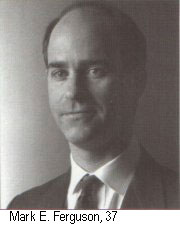 Eleven years ago, Mark E. Ferguson, a founding partner at the 24-lawyer Bartlit Beck Herman Palenchar & Scott LLP, developed a mantra from his experience working with name partner Fred Bartlit: Work hard, don't cheat and never give up. That came into play last summer when Ferguson, along with Bartlit, defended Pittsburgh-based Miles Inc., now known as Bayer Corp., in a patent infringement suit.

Ferguson came into the case about a month before it went to trial. Ortho Diagnostic Systems Inc. claimed that its patent for laser optical blood diagnostic instruments had been violated by Miles. Ferguson and Bartlit argued that not only was there no infringement, the patent held by Ortho was invalid. They proved that component aspects of the invention-and in some cases, virtually the entire invention-had been created by others and publicized prior to the patent being applied for. They won on both counts.

"Mark assisted us enormously," says George J. Lykos, vice president and assistant general counsel at Bayer. "He and his firm produced excellent results. Mark was able to quickly master some complex facts. He displayed intelligence, a willingness to understand the client's objectives and energy to put into achieving an excellent result. And, not insignificantly, he displayed a very cool and charming manner."

Ferguson, a 1983 graduate of the University of Michigan School of Law, has a general commercial litigation practice, where about one-half of his cases are intellectual property matters. Although the Bayer case was very tough and he was only given a short time to work it, he says that he came out with a "pretty much bullet-proof" judgment for his client.

"If you work hard, don't cheat and never give up, you can go a long way," he says. "Of course, you have to have the understanding of the law, the background, intelligence and interest. There are a lot of people who can show you a very good pedigree. But I think that knowing your client's business and doing those three things are what create good results."

The case was won on the grounds that the statute of limitations had run out. Ferguson believes Whirlpool didn't rely on the projections like it said it did, or else they sat on their hands before doing something. The case was also won on appeal.

"I think a lot of lawyers don't look at, with a fine tooth comb, what are actual legal defects in a case," says Ferguson. "If they do, they are unwilling to push at the early stages, where there is an actual chance of winning. I've had a lot of success making arguments early in cases where I've seen similar arguments being passed up by others."

Randall S. Strange, senior litigation counsel at W.R. Grace, says he was impressed enough with Ferguson's work to recommend him to others. "When I run into an attorney as good as Mark, and someone asks me for a good general litigator, I think of him."

Ferguson, who left Kirkland & Ellis with the five name partners of Bartlit Beck in 1993, sees his practice developing in many directions. He wants to be viewed as a lawyer who can take complex matters, simplify them and present them effectively to achieve the good, fair result.

"I think that will take me into a wide variety of matters, including technical, financially complex cases and technical patent cases," he says. "I used to do a lot of antitrust litigation. If it rears its ugly head again, I'm sure I'll do more of that. I'll continue to develop both as a team member in big cases, either as the leader of the team or as the co-leader of the team."