America's Top Trial Lawyers—Who They Are and Why They Win 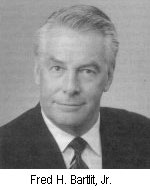 Fred Bartlit is senior partner at the law firm of Bartlit, Beck, Herman, Palenchar & Scott in Chicago, Illinois. His principal area of practice is high-risk and complex litigation.

Bartlit was born August 1, 1932 in Harvey, Illinois. He received his BS degree in Engineering from the United States Military Academy, West Point, New York. He served four years in the US army, including service with the US Army Rangers. He attended law school at the University of Illinois College of Law. He received his JD degree in 1960, graduated first in his class, with the top academic record in the history of the College of Law. He was also editor of the law review. 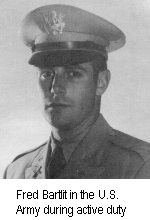 Bartlit holds the singular distinction of performing more actual on-trial days before juries than any other large-firm business lawyer in the United States. In a recent year he has spent thirty weeks on trial before juries in four trials ranging from the Virgin Islands to San Jose, California. He is also one of the few lawyers whose practice consists of being retained for tough cases in jurisdictions other than at home.

Bartlit considers one of his most memorable trials to have been the case in Scotland when he represented General Motors (Allison Gas Turbine) in a United Kingdom civil proceeding. This concerned the British Department of Energy report that claimed Allison jet engines ignited a gas cloud that resulted in the $2 billion Occidental Piper Alpha 1988 North Sea platform explosion. In the disaster, 166 lives were lost. He was invited to participate in the proceedings by the trial judge, Lord Cullen. He was given full rights of audience and was the sole trial counsel for GM. Bartlit was the only non-UK lawyer. The rest were leading members of the Scottish and English bars. He was given full rights of cross-examination, which he exercised by cross-examining over thirty experts and other witnesses. The proceedings were highly technical from a scientific and engineering standpoint, with experts in every discipline from three-phase gas flow to computer simulations of explosion overpressures and flame fronts. "The final result was a brilliant opinion by Lord Cullen, covering every aspect of the incident. Allison Gas Turbine was found not responsible in any way...The case is unique in that, to my knowledge, no other US lawyer has been accorded rights of audience in the UK."

Another large case in which Bartlit was engaged, the General Motors Fleet Discount Case (United States v. General Motors), took place in 1974. This was a case involving billions; in today's dollars, perhaps as much as ten billion. It began with a criminal indictment of GM, Ford, and Chrysler, claiming price fixing on vehicles sold to Hertz, Avis, and state and local governments. Bartlit says the case was interesting, not only for the large monetary amount involved, but because of the witnesses who included Lee Iacocca, John DeLorean, Henry Ford, Lynn Townsend, Ed Cole, and other big names in the auto industry. The case was tried to a jury for four moths. Bartlit secured an acquittal for his client.

Recently Bartlit was retained by General Motors in a last-minute decision to defend it in a case where a young man died in a fiery crash involving a GM truck. The plaintiff alleged design defects in the vehicle's fuel tank. The jury ultimately returned a verdict of more than $100 million against the company. Many observers felt that with the particular facts and the intense emotion of the case, it simply could not be won. Nevertheless, Bartlit accepted the engagement and waged a spirited defense for his client. The nature of the case, and Bartlit's research into the customary tactics of opposing counsel, dictated a strategy focusing on the use of in limine motions to set up critical issues for appeal, and protecting these issues on a daily basis during trial. As this book went to press, the entire $100 million plus jury verdict verdict was set aside by the Georgia Appellate Court.

Bartlit has continued to be the eleventh-hour trial lawyer in big cases. In 1993, he was called in after most of the discovery was complete to represent FMC in a $50 million environment case against Lloyd's of London. In 1994, he was retained at the last minute to represent Miles in a $60 million laser-optics patent defense against Johnson & Johnson. In both cases he secured jury verdicts for his clients.

Operation Greylord
In 1986, the US District Court for Northern Illinois appointed Bartlit to be special counsel and gave him subpoena power to investigate alleged misconduct of lawyers implicated in the Greylord judicial bribery scandals. Bartlit was named because "he's a methodical, meticulous investigator who is tenacious as a bulldog and not political," according to one federal judge. About 300 lawyers testified in bribery trials, have been named in testimony, or have been indicted in a widespread Justice Department investigation of corruption in the Cook County court system. The code-named investigation, Operation Greylord, resulted in the convictions of six state court judges, thirteen attorneys, sixteen police officers, and court personnel on extortion and bribery charges. The federal judges exercised the rare move to appoint an outside counsel because of disillusionment with the Illinois Supreme Court that oversees attorney discipline. According to one unnamed US district judge, "A lawyer can do anything short of assassinating the entire Illinois Supreme Court and still get his license back." (Source: Larry Green, Los Angeles Times, July 16, 1986) 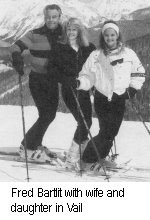 For the past few years, along with his full trial schedule, Bartlit as been leading an initiative to revolutionize the way litigation is handled in the United States. He considers this to be perhaps the most important aspect of is professional life. He is attempting to abolish lawyers' time-based billing. He believes that litigation is the single most inefficient business process in America. The hourly rate rewards inefficiency and penalizes efficiency. He proposes to put the economic incentives where they should be, and reward results and efficiency, not hours. Both lawyer and client should be at risk not just the client.

He acknowledges that many law firms think he is out of step with big-firm mentality, and ask, "What if a law firm made a bad deal and the case costs more than they thought it would?" His response is, "This happens to businesses all the time. Lawyers are the only people who expect that every business deal will be profitable and have the same high-profit margin." The concept is catching on in some areas and Bartlit has been contacted by senior management of Fortune 500 companies who want to work with him to bring his concept to fruition.