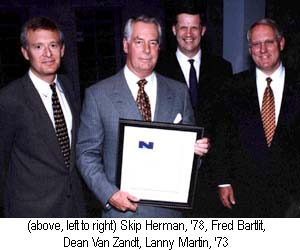 In front of a jury, the best trial lawyers are gifted teachers. They reduce difficult concepts to their essential elements or turn a complex series of events into an elegant, easily understandable story. While this is something usually learned after years of trying cases, a new research center at Northwestern's law school will introduce law students to the technology and the presentation skills that will make them better teachers and narrators in the courtroom earlier in their career. The center will also serve as a think tank, providing Northwestern faculty with the resources to conduct advanced research on trial and trial strategy. In addition, it will sponsor an annual conference at the law school that will bring top scholars, jurists, and other experts to discuss leading issues in the legal profession.

Named after one of the nation's most successful and respected trial lawyers, the Fred Bartlit Center for Trial Strategy builds on one of the law school's strengths, simulation-based teaching of trial and negotiation skills, while also providing an understanding of the changing nature of jury trials and the place of technology in the courtroom. It will also examine the changing face of the contemporary jury in order to give lawyers across the country a better understanding of the people who decide the outcome of a trial.

The effort to raise funds and establish the center at Northwestern was led by one of Bartlit's law firm colleagues, Skip Herman (L78), and a former colleague, Lanny Martin (EB68, L73), who is currently the chairman and CEO of Titanium Metals Corporation in Denver as well as chair of the law school's campaign steering committee. Both hold Bartlit in high regard for his skill in the courtroom. His trial record after thirty years at Kirkland & Ellis and seven years with Bartlit Beck Herman Palenchar & Scott LLP, the firm he founded in 1993, tells one part of that success. With a long list of big wins and successful settlements, he is in great demand by companies and individuals faced with complex, high-stakes litigation. In 1997, the National Law Journal also named Bartlit one of the one hundred most influential lawyers in the country.

The lawyers at Bartlit Beck are best known for their highly effective use of technology, both in the preparation and presentation of a case. The firm's offices boast a fully equipped courtroom where Bartlit and his colleagues prepare for trial in realistic surroundings and with the most advanced trial presentation hardware and software available. They also meet to consider the best method for presenting information in a way that jurors will retain it. "Fred in unique in that he thinks about cases and the practice of law on a theoretical level, much like a professor," says Herman of Bartlit's leadership in formulating the firm's strategies regarding the use of technology in the courtroom. "He also has the ability to put his theories to successful real-life tests. He doesn't just think about the case he's on, he thinks about the broader implications of his ideas and the issues involved."

It is Bartlit's insight into the way technological changes are affecting litigation that brought Northwestern's law school and Bartlit Beck together to form the Bartlit Center. With one of the country's leading trial advocacy programs, David Van Zandt, dean of the law school, thinks Northwestern is uniquely positioned to take advantage of the school's growing relationship with Bartlit Beck to better prepare students for a successful legal career. "The center's work is opening up the student's eyes to far more than just the elements of a trial and how they fit together," explains Dean Van Zandt. "It will help us take a leadership role in understanding the strategic and technological complexities of litigation. I'm sure there will be quite a few law schools emulating the Bartlit Center in the future."

One class has already been offered to second-and third-year students through the Bartlit Center. Taught at the firm's offices, Trial Technology was led by Bartlit Beck partners Chris Lind (L94) and Peter Bensinger. According to Dean Van Zandt, using other firm's facilities for the center's courses not only strengthens the relationship between area firms and the school, but also allows the school time to consider what it might invest in terms of infrastructure for the programmatic center.

Trial Technology highlighted the use of technology in each stage of litigation-in discovery, during case preparation, and at trial-and challenged students to become better teachers in the courtroom. In Lind's view, the craft of presenting a trial to a jury needs to be addressed early so that students will get ahead of other lawyers just entering the profession and remain at the leading edge of changes in the field throughout their career. "The substantive law and the discreet skills such as doing a closing argument haven't really changed in the last one hundred years," he explains. "What we're teaching is an entirely different set of skills. In the past, students would have had to wait until they entered a firm to learn this, or until they taught themselves. Instead, we are leveraging technology to teach students how to be better, more efficient lawyers from the start."

Lind and Bensinger also emphasize skills that will help turn a complicated explanation into a coherent, compelling story and will give students an edge when they step before a live jury for the first time. The class received high praise from second-year student Eric Maurer. In addition to studying courtroom strategy and jury dynamics, assignments on graphic design, presentation skills, human learning, and aesthetics challenged Maurer in ways he didn't expect. "Facing a career that will develop into the next century, I'm glad I have a grasp on the cutting-edge technologies now that will make me a better teacher-attorney in the courtroom," he explains. "On the other hand, it's important to note a fundamental lesson reiterated in the course – that the goal is always to convey information as simply as possible. One of the real challenges is knowing when to leave the technology behind for simpler, more effective means of communication."

Lind knows from firsthand experience how effective a concise, informative presentation can be. Last year, he was involved in a patent dispute which required him to explain a judge's prior ruling on a disputed patent and how his client's product, a carpet extractor, differed from the plaintiff's patented product-all to a jury that knew very little about the mechanics or engineering of carpet extractors. Lind used computer animation and an annotated image of the patent to help make his case. First he projected a section of the patent document on a screen, focused on a particular term or passage, and then inserted into the text a judge's previous ruling on what the issue or wording meant. Then he cut away all the unnecessary text and displayed two animations: one showed exactly how the related part of the patented product worked. Next he showed how his client's product worked. "We ended up with one screen right in front of the jury that gave a very simple explanation of the differences between the two," recalls Lind. "It made a very convincing argument."

Although the use of computers and sophisticated presentation techniques are an important part of the curriculum, these topics only begin to address what Lind sees as the driving force behind changes in the way attorneys have to present evidence and testimony. "Generation-X jurors and even some baby boomers have been raised on television, so they're used to learning visually," he explains. "The youngest jurors we're beginning to see have also been raised on computers and are used to taking in visual information very quickly." As a result, he feels that there is a growing expectation, almost a requirement, for lawyers to present information visually in order to make a strong case.

The changing makeup of today's juries will be high on the agenda at the first annual conference sponsored by the Bartlit Center this month. "The American Jury Trial: Promoting Juror Understanding Through Innovative Litigation Techniques" will bring together prominent judges, lawyers, and legal consultants to address such issues as the role of technology in the courtroom, innovative trial strategies that help teach complex ideas, and even the future of the citizen-based juries.

One of the most hotly debated legal questions today is whether panels of experts in complex cases such as patent infringement, intellectual property rights, or product liability should replace traditional juries. Proponents of expert panels feel that the difficulty of highly technical cases may exceed the capability of nonexpert jurors to render a fair and informed judgment.

The Bartlit Center was formed, however, under the belief that the opposite is true: a nonexpert jury can render a fair verdict even in complex cases. For the burden falls not on the jury, as Fred Bartlit would say, but on the attorney. This belief is part of Bartlit's "culture of results" philosophy he cultivated at his firm. "We are designed to achieve the client's goals, which are measured by the results rather then the hours we work," explains founding partner, Skip Herman. It is not uncommon to find Bartlit behind a keyboard writing up case outlines or performing other routine tasks usually handled by an army of associates at larger, bottom-heavy firms.

It all speaks to Bartlit's passion for preparation, which an effective teacher must possess. It is this work ethic that the center which bears his name hopes to spread among its young lawyers in training.