Winning - 10 of the Nation's Top Litigators 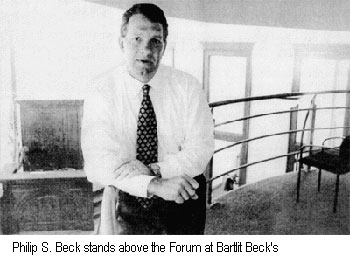 TO WIN A TRIAL involving a complex matter, attorneys have to establish "a simple theme that squares with common sense," says Philip S. Beck. This theme, he believes, does not have to cover everything that is expected to come up in the trial.

"Too often lawyers in complex litigation come up with a story that explains away every conceivable piece of evidence," he says. "But juries are aware that there are inconsistencies in life."

Mr. Beck subscribes to the principle that "when more than one explanation is possible, the simplest explanation is always correct and always the most believable." Much of his pretrial work is devoted to the search for this simple explanation. Trials are often lost, he believes, when lawyers fail to "focus on making complex stories simple and understandable."

Mr. Beck is a specialist in handling complex litigation, primarily for the defense in civil cases. He has never lost a jury trial and has achieved some of the largest defense wins of the past several years for such clients as Houston Industries Inc., Dresser Industries Inc., United Technologies Corp. and FMC Corp. His win in a breach-of-contract and fraud charge against United Technologies received an honorable mention in The National Law Journal's 1996 list of best defense wins; another defense win, in which he represented NL Industries in a toxic torts action, was one of the top 15 in the NLJ's 1994 list.

His most recent major victory came in April in Houston, where he defended Alpha Therapeutic Corp. on charges that it and co-defendtant Armour Pharmaceutical Co. had negligently failed to prevent the contamination by the HIV virus of the blood concentrates they produced. These concentrates had been considered a wonder drug by hemophiliacs because they enabled them to live nearly normal lives, Mr. Beck notes. But as a result of contamination, half of the hemophiliacs who used the products from 1978 through 1984 were infected with HIV.

Both Alpha and Armour are part of the $650 million global settlement to HIV-positive hemophiliacs by pharmaceutical companies that made the concentrates. In re Factor VIII or IX Concentrate Blood Products MDL 986 (N.D. ILL)

The two teenage plaintiffs in the Houston action, Blaine Howray and Byron Brown, had been diagnosed as HIV-positive in 1985: each had opted out of the global settlement to pursue individual claims. They acknowledged that AIDS was unknown when the concentrates were first on the market. But in the early 1970s, "people did know that hepatitis could be transmitted by these products," Mr. Beck says. A heat treatment tested by Alpha, approved by the FDA in early 1984, killed hepatitis and killed the AIDS virus by accident. "The plaintiffs claimed that if Alpha acted earlier to fight hepatitis, they could have prevented AIDS," Mr. Beck adds.

No More Than Three Points

To simplify the case, Mr. Beck established three points: "I stress with the people working with me that if you want the jury to rememher more than three things, they have to rhyme.

"My first point was that Alpha was not negligent," Mr. Beck says. When the company first learned of the connection between the HIV virus and its blood products, "Alpha went beyond doctors' recommendations, and took aggressive actions" to end contamination.

The second point was that "Alpha always worked hard to improve quality. It was important for us to show that throughout the years that Alpha was taking lots of different steps to improve the product."

The third point acknowledged that "It was a horrible tragedy, but that you can't blame Alpha for preventing a disease no one ever heard of."

To convey these points, Mr. Beck developed a visual presentation. "The way to tell a convincing story is with a heavy use of visuals and graphic evidence." The second point, demonstrating how Alpha worked to improve quality, was particularly challenging, he says. "You have to make it simple enough for the jury to understand, but you also have to communicate how difficult the process is."

To explain the process of making blood concentrates and to itemize each improvement, Mr. Beck developed a large magnetic board with 12" by 12" refrigerator magnets. On these magnets were graphic drawings of the steps Alpha followed to produce the blood products. "I worked longer on these than on any other part of the case," he notes.

Mr. Beck worked with a graphic designer and an Alpha scientist to develop the magnets, which were used to great effect during the scientist's testimony.

Mr. Beck also produced a 1970-85 timeline covering what the world knew about AIDS and hemophiliacs. The timeline, which noted the different improvements in blood concentrates as well, was a more dramatic way of showing Alpha's contention that "nine-tenths of those with HIV had already been infected by the time we understood the problem."

Unlike many attorneys, Mr. Beck believes in a long and detailed opening statement: "To a defense lawyer, the opening statement is the most important stage of a trial. It's not unusual for it to be weeks hefore we can tell our story. We have to set our themes in the opening or I've abandoned the field to the plaintiffs."

While he uses simple themes, he also provides a lot of detail. "It's not my goal for the jurors to remember every detail. You give the jury a framework for processing the information, so they will process it in a way that is consistent with your themes."

He also gears his cross-examinations towards his themes, saving an aggressive approach for witnesses who contest his view of the facts. "The experts who were world-class authorities, giving honest, straightforward answers, I treated with respect. But I went after the experts who said Alpha acted unreasonably."

One expert, for instance, was testifying about the use of heat treatment. Mr. Beck attacked the fact that he was being paid $600 an hour to testify for the plaintiff, and got him to admit that he had never done any studies on the blood concentrate and knew nothing about hepatitis, and that his only involvement with the effect of heat on the blood product was the result of his litigation work.

In the courtroom, Mr. Beck uses a laptop computer connected to a small laser printer under the table. He puts his outline for his cross-examination and notes in the laptop, along with documentary evidence, including transcripts of testimony from depositions and other trials. "When something a witness said didn't ring true, I did a quick word search." He would find something in the deposition then insert a note in his outline. "I adapt the outline on the fly, then hit the print button and have the revised outline available for the cross."

"The laptop is always in court with me," says Mr. Beck. "Some lawyers tell me that jurors will think you're a big rich defense lawyer and hold it against you. But most people nowadays work with computers, and jurors appreciate when you're well-organized."

His own presentation was very brief. With the help of visual aids, he had the Alpha scientist describe making and improving blood concentrates and the medical director discuss what the medical community knew and when they knew it.

The closing was emotional and dramatic. It is essential, Mr. Beck says, "to take on directly the emotional part of the case. This is the kind of case that makes you cry. Anyone with a heart is going to feel sympathy." To counter this, "you have to try to personalize the company; you have to put a face on the company."

The plaintiffs' counsel had attacked the Alpha medical director, Dr. Jonathan Goldsmith, Mr. Beck says, "accusing him of participating in the deaths of thousands and asking him how could he sleep at night." Mr. Beck turned to that question in the last moments of his closing.

"On behalf of Dr. Goldsmith, on behalf of all of the men and women from Alpha, how do we sleep at night? Here's how we do it. We lay our head down after we've spent the day doing our best with the knowledge that we have, and sometimes some of the people from Alpha wake up knowing that if they'd had better knowledge earlier they could have saved more lives, and sometimes they wake up knowing that if they or somebody else had a stroke of genius three or five or eight years earlier, then good, young men like Blaine and Byron would have been saved from the horrible misfortune that's befallen them.

"But Dr. Goldsmith and the other people from Alpha and the people from Armour, they're real doctors and real scientists and they live in the real world, and they have to make decisions based on what is known to them at the time. They don't have the luxury that a plaintiffs' lawyer does of looking back 20 years later and second-guessing every decision that was made."

This article is reprinted with permission from the September 22, 1997 edition of the National Law Journal © 1997 NLP IP Company. All rights reserved. Further duplication without permission is prohibited.