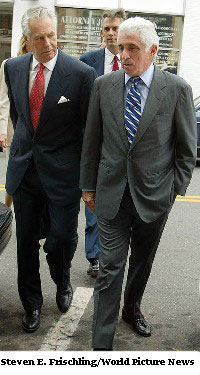 Bartlit Beck attorneys Fred Bartlit, Shawn Fagan and Hamilton Hill represented Forstmann Little & Co. in a lawsuit brought by one of Forstmann Little's limited partners, the State of Connecticut pension funds. Connecticut claimed damages of over $125 million for itself and over $1 billion in derivative claims, alleging violations of the securities laws, breaches of contract, and breaches of fiduciary duties. The suit was the first ever filed by a limited partner against a major private equity firm, and it was closely followed by every major financial publication.

The five week trial took place in the small town of Rockville, Connecticut. During trial, the judge granted Bartlit Beck's motion to dismiss all of the claims alleging fraud and deceit. At the end of the trial, the jury returned a defense verdict for Forstmann Little on the remaining claims. The jury found both that Connecticut had been fully informed of the investments and had approved of them at the time that they were made, and that Forstmann Little was fully justified in relying on the advice of its counsel when making the investments. The verdict was greeted with a nationwide sigh of relief from investment firms across the country.

"A six-person Connecticut jury ruled that New York financier Theodore Forstmann and his buyout firm, Forstmann Little & Co., owed the state nothing for having lost $125 million of its money investing in telecom companies. While the jury found them guilty of violating a couple of details of their investment contract with the state pension fund, the panel denied the state any compensation on grounds that it knew what it was getting into by investing in such high-risk ventures.

"Mark down a victory for the proposition that investors are accountable for their own decisions.

* * *
"Let's hope the private-equity markets have been paying attention. Had the Connecticut suit resulted in damages, it would have been open season for other state pension funds to sue to make up for their own bad investment decisions. "

"A sigh of relief was heard across the US private equity industry last night when Theodore Forstmann, the buy-out veteran, was told he did not have to return $125 M from failed investments to the state of Connecticut.

* * *
"In response to yesterday's verdict, Mr. Forstmann said his firm was 'very pleased' with 'a complete victory.' One person close to the financier echoed those comments, adding: 'It was all about the money for them anyway.'"

* * *
"The case brought by Connecticut is generally regarded as among the first lawsuits filed by a public pension fund against a private equity group, and the trial's outcome was being closely monitored throughout the industry."

* * *
"If Connecticut prevailed before the six-member state jury, the case could have broad implications for the largely unrestricted freedom buy-out funds now have in pursuing investments backed by money from pension funds, industry experts said."

"The judge in the civil trial of Forstmann Little & Company, the buyout firm, threw out accusations yesterday that it misled Connecticut's state pension fund, which is suing for breach of contract over money-losing telecommunications investments.

* * *
"The ruling came in response to a motion by Forstmann Little lawyers to dismiss the case after 10 days of testimony from eight witnesses. Connecticut is seeking the return of its share of the losses—more than $120 million. The trial began on June 1.

"Shawn F. Fagan, a partner in the law firm of Bartlit Beck Herman Palenchar & Scott in Chicago, representing Forstmann Little, argued: 'There's no proof of any fraud, deceit or misrepresentation. They've alleged absolutely nothing that we've failed to disclose.'"

* * *
"Judge Samuel J. Sferrazza of State Superior Court said Connecticut's lawyers had not proved that Forstmann Little of New York deceived pension executives in making $2.5 billion of investments from 1999 to 2001.

"'There's no evidence from which I can find that Forstmann Little engaged in bad faith or intended to mislead the state of Connecticut,' the judge said after a hearing in Rockville."

"Forstmann's defense was handled by Fred Bartlit, a former Army Ranger who represented President Bush in the Florida-recount battle—a fact that seems to underline the political dimensions of the case. Bartlit, 71, is an imposing, athletic Reaganesque figure who, even when seated, towered over most of the observers in a thronelike ergonomic chair he'd had sent ahead from his Chicago office. His air of midwestern rectitude is softened by a courtly manner and a folksy vocabulary, and he sounded truly contrite when apologizing to opposing counsel for blocking their view."

"[T]he jury determined that the pension fund was not owed any damages, noting that the state had accepted dividends from the investments and complained only when the investments began to lose money. The jury also found that Forstmann Little had properly relied on the advice of legal counsel at every turn in making its investments.

* * *
"[Private equity] firms were worried that if the State of Connecticut prevailed in recovering losses, it could lead to suits from other investors that had lost money. The jury's decision against awarding damages appears to have quelled some of that nervousness."