'One of the Great Lawyers' Takes on Microsoft 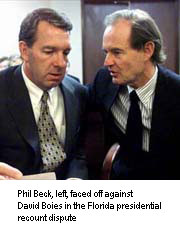 Philip Beck, lawyer for presidential candidate George W. Bush, was waist-deep in research the night before the historic Florida recount trial as the image of his opponent, David Boies, flickered across the TV screen.

While Boies, who was Vice President Al Gore's lead lawyer and chief spokesman, had to work the TV talk shows, Beck focused on preparing. He turned to a colleague and remarked, "That's a handicap for (Boies). He's not able to spend the same kind of time I'm able to spend."

Beck, 50, wound up besting Boies in one of the biggest political trials in U.S. history as he decimated two of Boies' expert witnesses before a worldwide TV audience.

Coincidentally, Beck was named to succeed Boies last week as lead litigator for the Justice Department in the Microsoft case. The biggest antitrust case in two decades is expected to shape the future of Web commerce and software choices.

Although Beck follows a legal superstar who enhanced his legend by shredding Microsoft in the trial, experts say Justice won't miss a beat as it heads back to court to decide the software giant's punishment. "He's one of the great lawyers in America," says Don Kempf, who worked with Beck for 15 years at Kirkland & Ellis in Chicago.

"It's an honor for me to be chosen for this role to succeed David. I don't feel any extra pressure," the gravel-voiced Beck says. He also is expected to play a role, at least as an adviser, in anticipated settlement talks with Microsoft that could head off another courtroom showdown.

An Appeals Court last month tossed out a judge's order to break up the titan but ruled that it waged an illegal campaign to protect its Windows software monopoly.

Beck's face-off with Boies in Florida highlighted their contrasts and similarities.

A lifelong Democrat, Boies was famous for his easy rapport with TV and print media, his no-frills courtroom wardrobe ($200 Sears suits and black sneakers), a knack for arguing without notes and a disdain for technology.

Beck, a political independent, shies from the spotlight. The Chicago Cubs fan and avid golfer "is just a very nice guy with a good sense of humor and low-key personality," says Barry Richard, Bush's chief lawyer in Florida. Beck favors designer suits and uses a Windows-powered laptop in court.

"I'm not a gear-head, but we make aggressive use of technology," he says, adding he had no opinion of Microsoft or the antitrust case before he was hired.

Yet like Boies, Beck "has a razor-sharp mind and tremendous ability to take complex matters and simplify them," Kempf says. That's a plus in a case in which Microsoft has suggested that antitrust law can't be easily applied to the arcane software industry.

Also like his predecessor, "He's a methodical, tenacious cross-examiner," Richard says. "He never loses his temper. He just continues to press the witness."

Beck's career was set at 8, when he started watching Perry Mason and The Defenders with his father, who owned a small chain of Chicago bookstores. "It's the only thing I ever imagined doing. I loved watching lawyers cross-examine."

In the Florida case, Beck picked apart Gore's expert witness, a Yale University statistician who was trying to bolster the candidate's plea for a recount in three counties. The witness, Nicolas Hengartner, argued a "chad buildup" in the ballot's first column kept voters from fully punching through their ballots. His affidavit cited a 1998 Palm Beach ballot with a similar problem to back his claim.

"I said, 'You never looked at that ballot closely or otherwise,' " Beck recalls. After a long pause, Hengartner admitted as much. The Perry Mason moment helped seal the case for Bush. "I get steeped in details and look for weak points, points where the witness seems to be papering over deficiencies, and I try to expose them."

Beck is still boning up on the Microsoft case and has not plotted strategy. But he'll be aiming for a Perry Mason moment. "That's the most fun I have."