An International Who's Who of Commercial Litigators 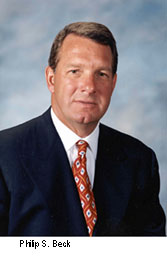 Philip S. Beck has tried cases to juries and judges throughout the country. He has had more of his victories included in the annual Top Defense Verdicts issue of The National Law Journal than any other lawyer in America. The same publication recently named him one of Illinois' top 10 trial lawyers.

Most of Mr. Beck's trials are outside Chicago, often in areas considered hostile to corporate defendants. For example, he won a 10-week jury trial in the Philadelphia Court of Common Pleas for NL Industries, which was accused of having contaminated a residential neighborhood with lead. He has won two lengthy jury trials, one in Harris County, Texas and the other in St Louis, Missouri for Alpha Therapeutic, which was accused of infecting children with the AIDS virus by using tainted blood to make medication taken by hemophiliacs. Closer to home, he was retained by Dresser Industries to challenge a US$54 million fraud verdict in a case handled by another firm in Cook county, Illinois. He persuaded the appellate court to vacate the damages award. On remand, the jury awarded just one dollar.

Mr. Beck is known as an innovator in the use of demonstrative evidence. His approach to complex commercial cases is to boil them down to a few simple themes and to make those themes memorable through an array of visual aids. He is equally at home with computer animations (which he displays using his own laptop at counsel's lectern) and more traditional graphics and models. He has lectured throughout the country on the use of visual aids to try complex cases more effectively.

Mr. Beck and the other lawyers at his firm are leaders in the use of technology to prepare and try cases. The senior trial lawyers at Bartlit Beck are all proficient with computers. They use transcript search and database programmes [sic], which they have customized to reflect their firm's unique approach to litigation, to ensure that the senior trial lawyer on each case has complete and instant access to all depositions, documents, and other case materials. These same tools are used at counsel table during trial to retrieve any relevant evidence on any issue that arises.

The Bartlit Beck firm is also a leader in the use of non-hourly fees. Most cases are handled on a basis that rewards success, punishes failure, and thereby aligns the law firm's incentives with those of the client.

In 1994, Mr. Beck and several others formed Bartlit Beck Herman Palenchar & Scott LLP, with offices in Chicago and Denver. In its short history, the firm has achieved an outstanding reputation. Bartlit Beck has "a roster of litigation stars [who] try cases all over the country, often of the bet-your-company variety, with an unparalleled record of success." (The National Law Journal, April 28, 1997).

For more information on Mr. Beck and his firm, visit their website at www.Bartlit-Beck.com. The website includes the complete trial records of Mr. Beck and his partners, reprints of articles about the firm and its lawyers, and the professional and academic backgrounds of all the firm's lawyers.

The editors of An International Who's Who of Commercial Litigators have selected "some 490 lawyers in 38 countries who can truly be considered leaders in the field of commercial litigation." The Preface to the current edition explains:

"Trial lawyers who are listed in this Who's Who are included because they have been nominated—indeed elected—by their peers through a process that involved polling more than 4,000 trial lawyers around the world. Clients who have been involved in the high-stakes litigation or arbitration realize that their most potent weapon is the right trial lawyer, and the smart ones are today selecting the right person, rather than a firm, for the job at hand. This can best be done by talking to those who have seen them in action, either as clients, co-counsel, or opposing counsel. That time-consuming task is largely eliminated by referring to a guide that includes only those who have been pre-selected by their peers. In the ever-changing world of the courtroom, great advocates come and go; and it goes without saying that it takes one to know one."