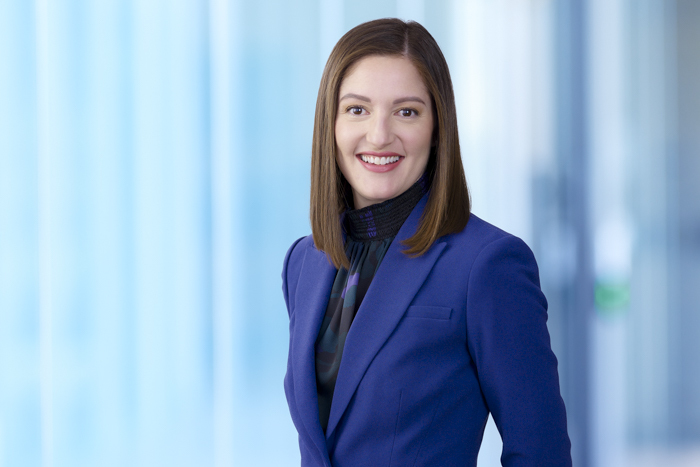 Kat Hacker is a trial lawyer with significant courtroom experience in high-stakes cases in state and federal court. Kat has spent over 100 days in trial, including trials followed closely by news outlets around the world. Kat has delivered an opening statement with billions of dollars at stake, cross-examined witnesses including one that led to a New York Times headline-grabbing mid-trial discovery, and argued motions and appeals across the country including recently in the New Hampshire Supreme Court.

Kat has also handled a number of intellectual property cases. For example, Kat second-chaired a patent trial for Amazon about whether Amazon should be liable for patent infringement when third-party sellers offer and sell infringing products on Amazon.com. The jury returned a complete defense verdict that was upheld on appeal. Kat also served as co-lead counsel for Wowza Media Systems in a patent infringement case about video compression. The plaintiff tried to get more than two dozen cases consolidated into multidistrict litigation. Despite Wowza's small size compared to other defendants like Google, Apple, and Netflix, the defendants entrusted the argument in front of the Judicial Panel on Multidistrict Litigation to Wowza's team. After a victory where the Panel refused to consolidate the cases, Wowza settled, escaping the case within just five months of it being filed.

Students for Fair Admissions, Inc. v. President and Fellows of Harvard College (D. Mass.)
Trial counsel in three-week race discrimination case against Harvard for its admissions practices that discriminate against Asian-American applicants. For press coverage on a cross-examination that led to mid-trial discovery of damaging documents from Harvard, click here.

Confidential Arbitration (AAA)
Trial counsel for oil and gas exploration and production company in commercial and state securities law dispute. Claimant sought more than $25 million. After a two-week arbitration hearing, the arbitration issued a favorable decision on every claim and ordered the claimant to pay our client's attorneys' fees.

Core-Mark International, Inc. et al. v. Sonitrol Corp. (Colo. Dist. Ct. and Colo. Ct. App.)
Trial and appellate counsel for Sonitrol, former subsidiary of Tyco International, in one-week damages-only retrial. Before Bartlit Beck got involved, a previous jury found Sonitrol willfully and wantonly breached its burglar-alarm monitoring contract with Core-Mark. Sonitrol's breach stemmed from its failure to detect three burglars in Core-Mark's warehouse, which allowed the burglars to loot the warehouse for three hours. Eventually, one of the burglars lit two fires that burned for five days and destroyed the entire warehouse. Core-Mark claimed damages for both the theft and arson, which totaled over $23 million in damages and climbed to over $50 million with pre-judgment interest. Despite the fact that the jury in the previous trial had given Core-Mark all the damages they asked for and despite the fact that the court precluded Sonitrol from calling a damages expert, the jury in the retrial awarded Core-Mark only $2.75 million in theft-related damages, the damages number Sonitrol sponsored. The jury awarded no fire-related damages. The Colorado Court of Appeal affirmed the jury's verdict.

Per- and Polyfluoroalkyl Substances (PFAS) Cases
Lead national counsel for DuPont on claims that its 2015 spin-off of The Chemours Company was a fraudulent transfer. Handling those claims in the aqueous film-forming foam multidistrict litigation in the District of South Carolina as well as cases in California, Louisiana, New Hampshire, New Jersey, New York, Ohio, Tennessee, Texas, and Vermont. Click here to watch Kat argue a personal jurisdiction appeal in one of these cases in the New Hampshire Supreme Court.

Realtime Adaptive Streaming LLC v. Wowza Media Systems, LLC (D. Colo.)
Co-lead counsel for Wowza in a patent infringement case about the use of the H.264 video compression standard. Plaintiff filed dozens of cases across the country and tried to get them consolidated into multidistrict litigation. We defeated that motion, and the case settled favorably shortly afterwards.

Click here for the Judicial Panel on Multidistrict Litigation's order.

Click here for the district court's motion to dismiss ruling.

Good Shepherd Hospital v. CompleteRx, Ltd. (Tex. App.)
Trial and appellate counsel at former firm for CompleteRx, Ltd., a pharmacy management company, in a breach of contract dispute with an ex-client hospital. Briefed, argued, and won writ of mandamus from a Texas state court of appeals requiring the trial court to allow CompleteRx to use the Texas offer of settlement statute.

Medivation, Inc. v. Regents of the University of California and Aragon Pharmaceuticals, Inc. (San Francisco Super. Ct.)
Trial counsel at former firm for Aragon Pharmaceuticals, Inc. in a breach of contract case concerning the right to develop certain chemical compounds for the treatment of prostate cancer. Won summary judgment granting Aragon the exclusive right to develop a promising prostate cancer treatment valued at over $200 million and rejecting all of the plaintiff's claims for damages. The case was upheld by the California Court of Appeal.

Order of the Barristers