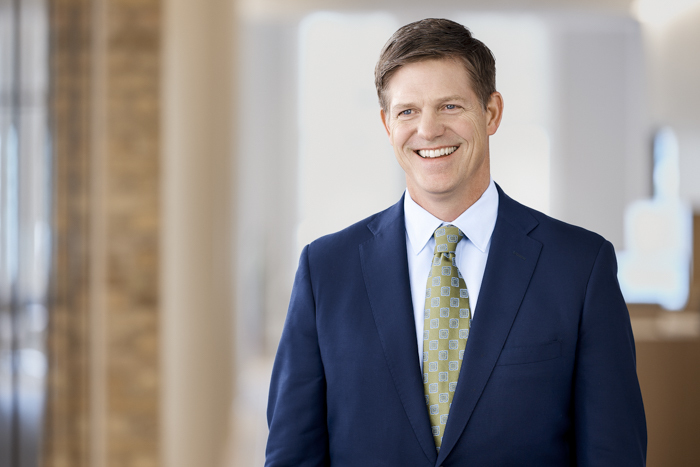 "If I have a bet-the-company trial I want Sean by my side. He appeals to juries and judges alike with his calm yet forceful demeanor." – Chambers USA Client's Guide 2021

Sean Gallagher is an accomplished trial lawyer with experience across a broad range of complex commercial litigation matters. The majority of Sean's representations have been for major U.S. and international companies in cases involving intellectual property (including patent infringement and Lanham Act claims), trade secret misappropriation, product liability, accountant liability, toxic tort, and breach of contract. Sean has also worked on a variety of other matters ranging from Gore v. Bush, where Sean was part of the Bartlit Beck team that represented President Bush at the trial court level, to Newsome v. McCabe, where Sean helped obtain compensation for a man wrongfully convicted of murder.

Sean is a nationally recognized attorney. He is Chambers ranked and listed as a "Litigation Star" by Benchmark Litigation. Chambers and Partners noted his "expertise handling large class actions, including those with product liability and breach of fiduciary aspects" and quoted sources calling him an "effective courtroom advocate and strategist" and describing his lawyering as "measured, focused and persuasive."

Nigel John Eccles et al. v. Shamrock Capital Advisors, LLC, et al. (State Court, New York)
Trial counsel for FanDuel founders and more than 120 former employees and angel investors in lawsuit against late-stage private equity investors and six of the seven former members of the board of directors of FanDuel. The suit alleges that the private equity investors and former board members wiped out the founders', former employees', and angel investors' interests in the company by breaching their fiduciary duties and unjustly enriching themselves in the wake of a 2018 merger between FanDuel and European bookmaker Paddy Power Betfair. Read the Complaint here. Coverage in the Wall Street Journal here and Reuters here.

Pelvic Mesh Product Liability Litigation
Trial counsel for Ethicon/Johnson & Johnson in defense of lawsuits alleging personal injuries caused by pelvic mesh medical devices. Designated trial counsel in a number of matters set for trial, both in state court and in federal cases remanded by the MDL court for trials around the country. In this capacity, served as lead trial counsel and secured a complete defense verdict after a three-week jury trial in the Philadelphia Court of Common Pleas. Click here and here to learn more about the case.

In re Teflon® Product Liability Litigation
Counsel for DuPont in more than twenty alleged intrastate class actions brought on behalf of consumers who purchased Teflon®-coated cookware. The cases were consolidated for pretrial proceedings pursuant to an order of the panel on multidistrict litigation. The cases were dismissed after the district court denied class certification.

Friel v. Federal Signal
Trial counsel representing Federal Signal at trial of product liability claims made by firefighters who allege that they have noise-induced hearing loss from exposure to sirens. Obtained jury verdict in favor of Federal Signal.

Confidential v. Novartis
Lead trial counsel for Novartis in an arbitration involving claims that Novartis breached a contract for the development of a drug compound licensed from a third party. Case resolved on confidential terms.

Rago v. Federal Signal
Co-lead trial counsel representing Federal Signal at trial of product liability claims made by firefighters who allege that they have noise-induced hearing loss from exposure to sirens. Jury verdict for plaintiffs.

Newsome v. McCabe
Trial counsel in this civil rights case for James Newsome. Mr. Newsome claimed that two Chicago police detectives framed him for murder, forcing him to spend fifteen years in state prison for a crime that he did not commit. Obtained a jury verdict of $15 million for Newsome.

Adjunct Professor, Northwestern University School of Law:  Taught "High-Tech Trial Techniques" class on the use of technology in the practice of law at trial and in preparation for trial

Ranked by Chambers USA as one of the leading litigators in Illinois.

Recognized by Thomson Reuters as a "Stand-out Lawyer"